I treat my MacBook Pro laptop very well. It barely has a scratch and it’s never had any accidental drops or damage. Even so, my 4 years of owning it has resulted in:

The total repair costs (excluding complete laptop replacements), which has thankfully all been covered by AppleCare Protection Plan, are roughly 4,000 USD. More than the initial cost of the laptop itself. Factoring in the cost of the complete replacements, it would be closer to 10,000 USD!

Apple support has been phenomenal though. As someone who travels a lot, being able to pop into any Apple Store anywhere in the world has been a huge benefit. Generally all my repairs have been very fast as well, usually completed within 1-2 days - so for the most part it hasn’t disrupted my work too much. Still, it’s been a lot of hassle.

Before getting a MacBook my previous laptop was a Dell XPS. During a longer trip to Japan my battery started to swell, significantly. After speaking to both Japanese and Swedish customer support they informed me there was no way to get a repair outside of Sweden, since that’s where I had bought the laptop. Great. Eventually, once I returned to Sweden, I did get the laptop repaired and then was able to sell it, before eventually switching to a MacBook Pro instead.

Anyways, here’s timeline of my MacBook Pro ownership, all the issues I’ve experienced and repairs I’ve made.

Unfortunately, since day one, my laptop was randomly freezing and getting random kernel panics. After speaking to a friend, they told me I had probably received a “lemon” unit (i.e. faulty from the beginning). To be honest, I’m not quite sure where the term comes from.

I eventually managed to return my initial unit. At first, Apple informed me that they couldn’t replace the unit and would instead offer to repair it. However, considering I had almost just received it, and experienced issues from day one, I was able to convince them to give me a brand new unit instead. Phew!

A couple of months in I started to get some issues with the keyboard. Specifically, the enter key stopped working. This led to my first top-case replacement.

Unfortunately after my top-case replacement, I was experiencing sleep issues and random crashes. My initial guess was that maybe there was something wrong with the replacement top-case, but Apple wasn’t really able to do anything about it at this point. I filed several bug reports to Apple during the next couple of months.

I was still struggling with the sleep issues and crashes. However, now I was also experiencing overheating issues and my screen would randomly turn pink/purple on wake up.

After dealing with all of these issues for several months now, I eventually managed to get a repair. This time they replaced the logic board.

Things we’re going quite well now. However, suddenly, one day my left speaker started to crackle and it made a loud bang (no audio playing at the time). Unfortunately I was abroad at this point and decided to wait until a better time to get it repaired.

I eventually managed to get my MacBook Pro in for service to deal with the speaker issue. They concluded that they needed to replace the left fan and the top-case.

A short time after my recent repair, my MacBook started making very strange sounds again, like a weird buzzing/electrical sound. Time for another visit to the Apple Store!

At this point, I was getting pretty fed of with repairs. Based on my repair history, having done 3 repairs within just over 1 year, I requested to have my unit replaced, which, thankfully was eventually approved.

This time I was given a:

Since I had already purchased AppleCare Protection Plan on my old unit, I of course wanted to transfer the remaining unused time to my new laptop. However, Apple said that I could instead buy a new plan on the new laptop, and get a refund for my unused period on my old laptop. I was happy with this, but unfortunately the entire process took almost 2 months.

After the previous replacement I had a pretty good run of nearly 8 months without any issues. Then, one day, my right-side USB ports decided to “explode”. I suddenly heard a loud bang and I could smell that my USB ports were burnt, as well as the end of my charging cable.

Some months later, I started having issues with my R and E keys, causing double clicks. I first took my laptop to the Apple Store to have the keyboard cleaned. However, after this didn’t help, they eventually decided to replace the top-case.

Amazingly, I didn’t have any issues during the whole of 2020! However, towards the beginning of this year I was starting to experience some new issues. My battery was getting pretty bad, and I was seeing a “Service Recommended” message. Also, my keyboard was showing some wear and tear after not having had another top-case replacement for quite some time now.

Then, suddenly an orange/yellow smudge started appearing in the bottom right corner of the screen. It would start very fade but eventually get much darker as the laptop got warmer. 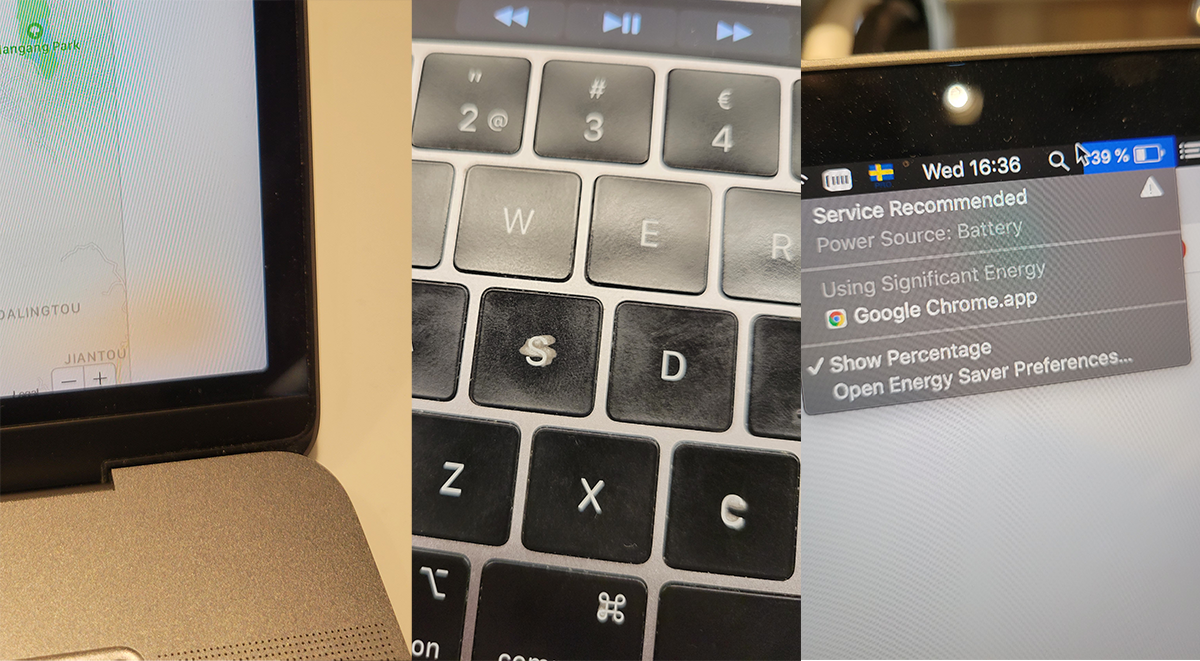 Eventually I decided to take it back to Apple and thankfully they repaired everything. Perhaps I should have waited a little longer since I wasn’t quite at the end of my AppleCare Protection Plan. However, I also figured it might be good to have some buffer time after a repair, in case something went wrong.

In fact, I did have to bring my MacBook Pro in for another minor repair. After picking it up from the Apple Store, my WiFi didn’t work. It seemed they hadn’t connected the antenna properly.

My AppleCare Protection Plan has now expired. I feel a little worried and nervous. Either I’ll have to live with any issues that occur from now on, or I’ll have to pay for the repairs myself, which have proven to be quite expensive.

As much as I don’t want to buy another Mac in the future, I have a feeling that I probably will. I’m eager to try out the 2nd generation M1 macs when they eventually get released.

There are some other interesting options out there, like the Framework Laptop or System76. I do also like the look of a Dell XPS or Thinkpad, but I don’t trust those companies to provide global support.

Unfortunately I’m also tied to doing some occasional macOS/iOS development. I guess I could maybe find a workaround for that by using mac VPS, but that might just be more trouble than it’s worth.

Get notified about future posts and projects.